What made the spectators of tonight’s match Montenegro-Slovakia wonder?

Tonight, at the city football stadium n Podgorica, the game was not the only thing being watched. The fans, who came to watch the Montenegro-Slovakia match, were greeted by an unusual environment for a sports stadium. On their way to the stands, photographs dedicated to the fight against gender-based violence were exhibited, with the main message being – Ask yourself!

This is also the title of a wider campaign, within which this exhibition is presented, and which is organized by the Delegation of the European Union to Montenegro and Europe House, in cooperation with the Football Association of Montenegro, NGO Attack and the Association of Psychologists, in order to draw attention to this burning social problem. The main target group of the campaign are men, in order to make them ask themselves and understand that gender-based violence is unacceptable. That is why the football stadium, as a place that primarily gathers male population, was a logical choice for the first showing of the exhibition.

HE Oana Cristina Popa, EU Ambassador to MNE, reminded of the devastating statistics during her visit to the exhibition. According to the data from the Police Directorate, two more women were killed by their partners this year, while the number of reported crimes related to domestic violence increased by as much as 35%. 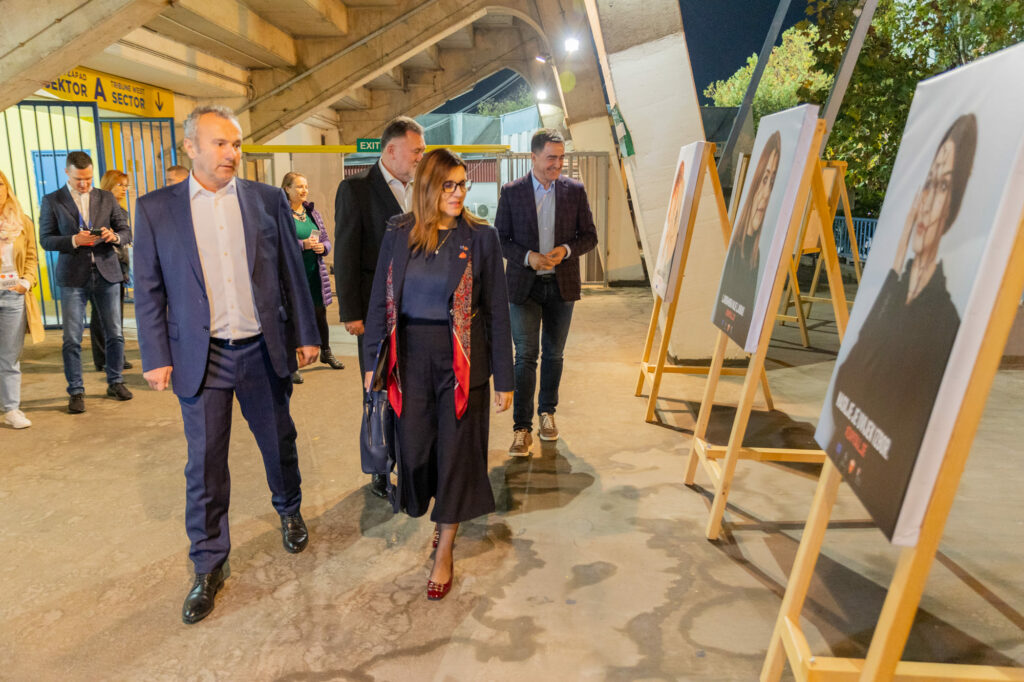 “The EU and Montenegro must be united in creating zero tolerance towards violence against women and girls. That’s why today we present the photo exhibition entitled ASK YOURSELF (ZAPITAJ SE). Today, at the football match, we want people to stop and think “what is violence, how do I recognize it and what can I do to help?” People saw eight powerful photos of women, which send strong messages that gender-based violence is unacceptable. If we all do more to expose gender-based violence, we are one step closer to eradicating it,” said Popa.

Photographer and activist Nada Vojinović explained that she took the photos using the double exposure technique, by combining photos of women with photos of broken objects, because she believes that the bully sees the person he is abusing as an object, not a human being. 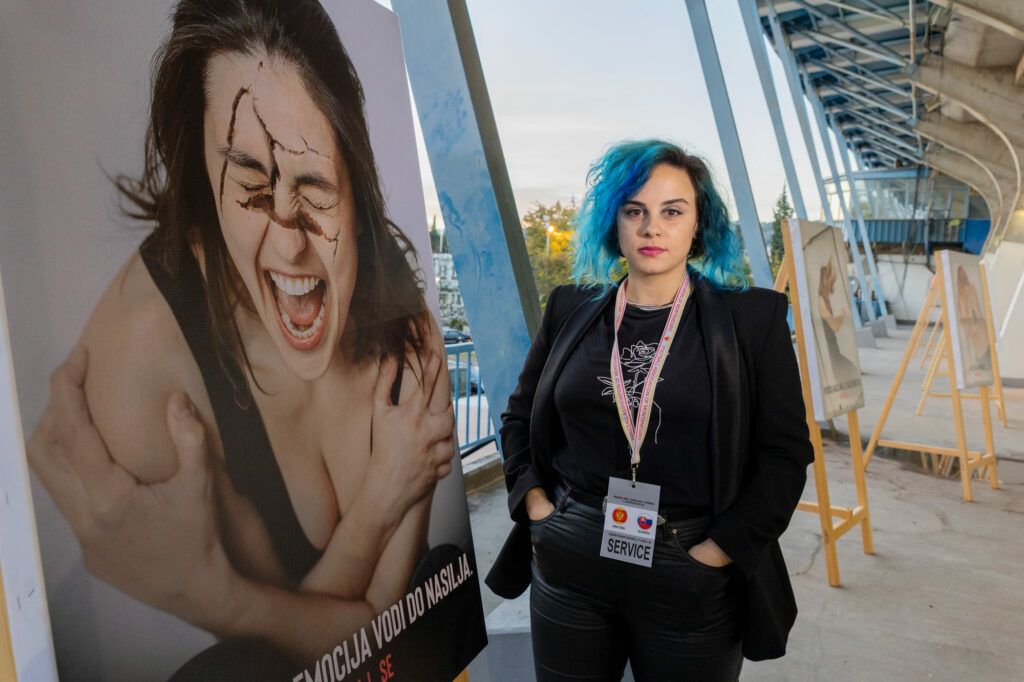 “It is a topic that I personally lived through and that will always motivate me emotionally to fight harder, until it is eradicated. There is no, nor should there be any justification for a bully. They are never provoked by clothes, an uncooked lunch, jealousy or an authentic lifestyle. Violence occurs in various forms and situations and at every corner. This society must awaken compassion, be more aware and be there for those who cannot fight this fight alone. These photos send a clear message – not a single woman ever again!” said the author of the photos.

The photos are also accompanied by strong psychological messages, so the fans, on their way to the stands, could read that suppressing emotions leads to violence, that violence is not innate, but learnt, that it is always a conscious choice, that jealousy is not love, that violence is weakness, not manliness, and that supporting the abuser is complicity. The messages were created with the help of the Association of Psychologists of Montenegro.

“The messages represent an unambiguous, concise address to the observer about the essence of violence. Their purpose is to make the viewers question themselves and analyse their internal processes, which can lead to, justify or support violent behaviour. The observer is invited to put the topic of violence against women in the foreground, at least in the moment when he is exposed to the photo and text, and decide, guided by a new awareness, what his role is in achieving the well-being of women in our society. We hope to motivate all people to make an effort towards more conscientious behaviour and a better life for others and themselves”, said Mihailo Šaranović from the Association of Psychologists. 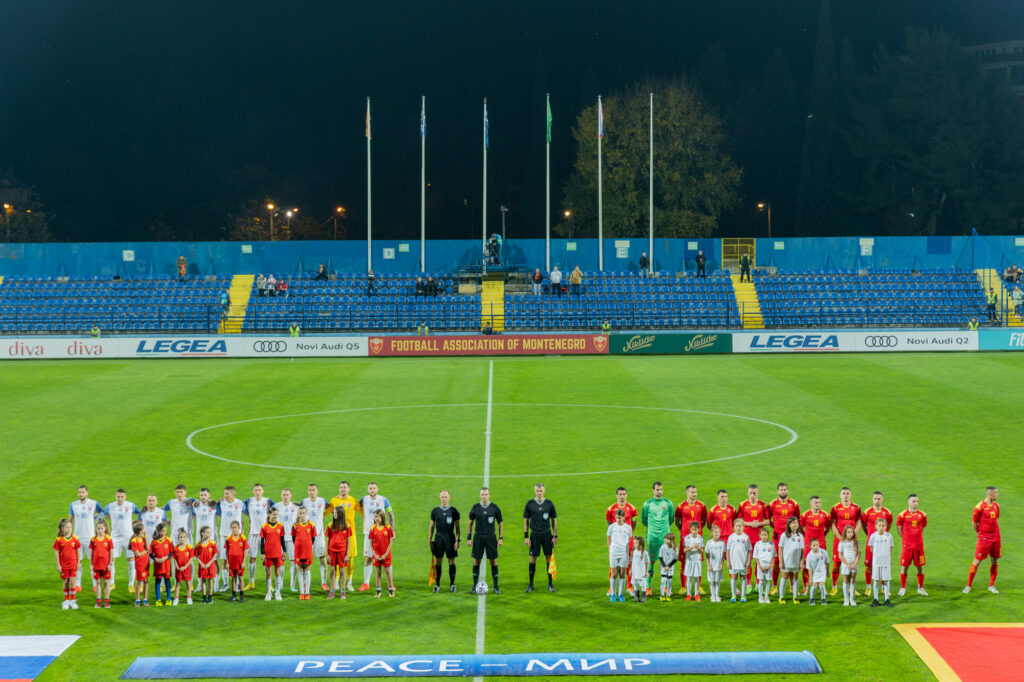 The Football Association of Montenegro says that they supported the campaign because they want to contribute to the fight against gender-based violence, which, as they point out, is an absolutely unacceptable social deviation. That’s why tonight, before the start of the game, there were girls symbolically standing next to the football players on the pitch.

“Only by working together on education and prevention can we influence the resolution of this problem. As a sports organization, we want a society that will provide equal opportunities and conditions for both men and women, just as it is the case on the football pitch”, said the PR of the Football Association of Montenegro, Mr. Branko Latinović.

Interested citizens can view the exhibition during next week at the Europe House, which is located near Argentina Square, and starting from tomorrow they can also follow the contents of the campaign on Europe House’s social network channels. The #ZAPTAJ_SE campaign is organized during the month when 16 days of activism against gender-based violence are being marked globally. 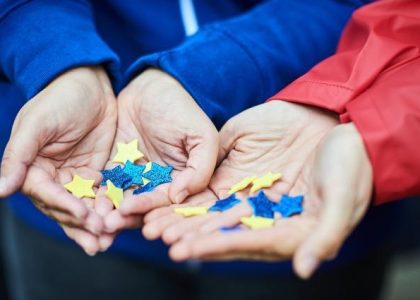 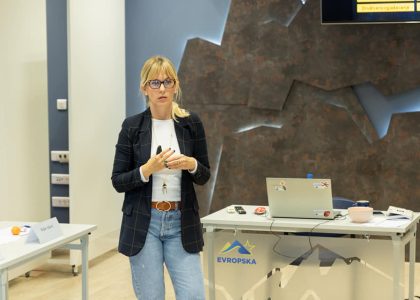